OTB Chess tournaments after the lockdown

In my country, some international chess tournaments will take place as they do every single summer. But what safety measures does a tournament of such a big size (200+ people) need to take in order for all players to be safe? Isn't it kind of a risk?

Of course it poses a risk. If one COVID positive player coughs or sneezes or even speaks he can infect the whole playing hall. If a players blows his nose and then touches pieces or shakes your hand he can infect you. Handshakes should be forbidden anyway.
It is not practical to impose players to wear a mask. They could screen players body temperature, but you can be COVID positive without any raised body temperature.

Life is a risk :)
Found that picture on one german club-site: 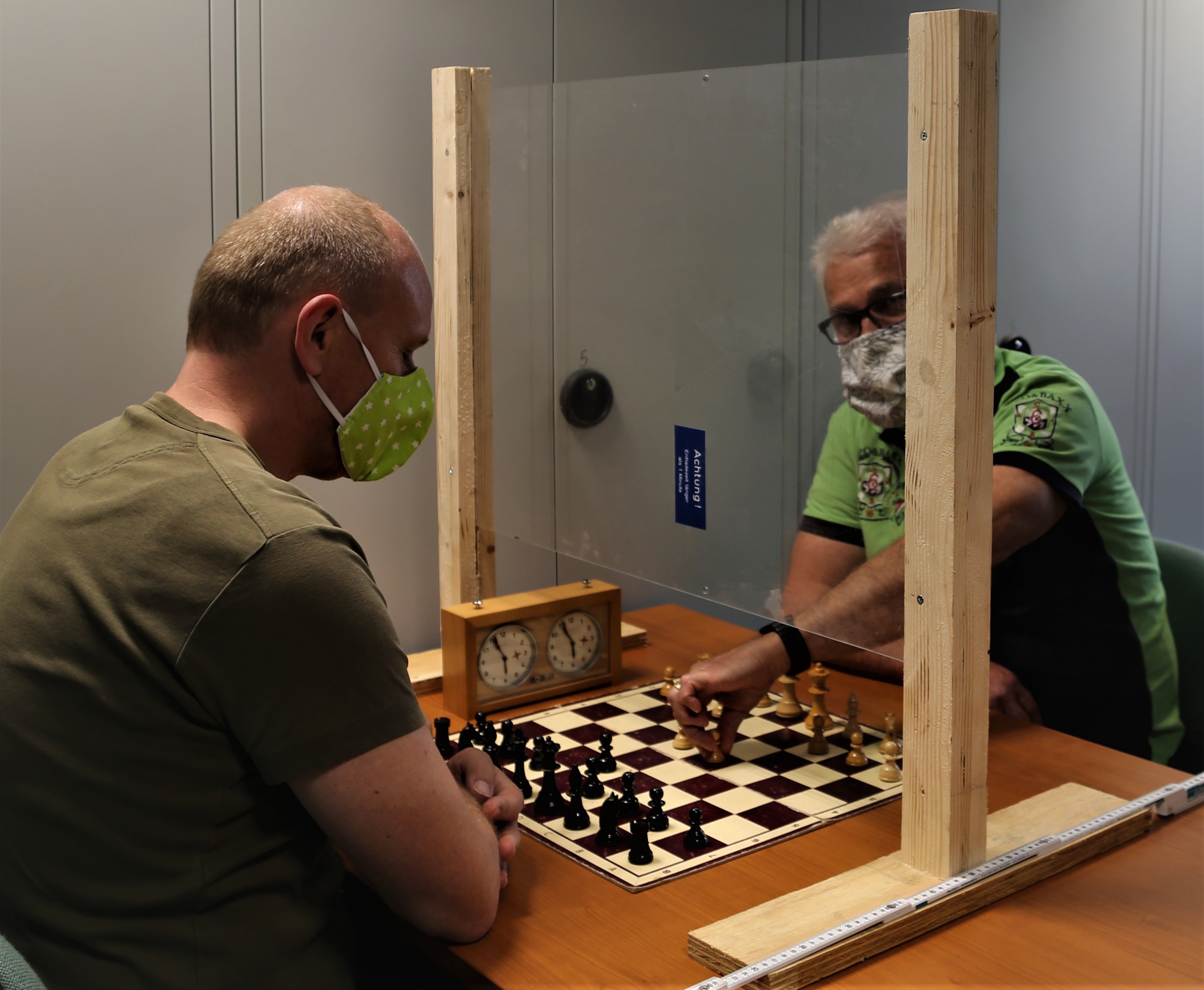 OTB-future?
They still do press the same clock and capture same pieces...

They press only their side of the clock.
Instead of capturing they can move their piece and shove the opponent's piece aside without touching it for the opponent to remove it from the board.
The "j'adoube' rule should be amended that you are only allowed to adjust your own pieces, not opponent's.
The chess board is probably the lesser risk: the bar, the toilets, the hall are probably more risky.
Spectators in the hall also pose a risk.

probability of contracting SarsCov2 from surface is minimal according to current understanding. So major issue is to reduce aerosols and droplets . mouth/nose cover should stop from spreading the virus. For protection of yourself N95 respirator would required

In my opinion it's one of the easiest ways the virus could spread, during an OTB tournament that is. What about the hosts of the event though? Aren't they held responsible for any new cases? I wouldn't want to go to court for some chess tournament.

Of course they all will use caution, some smaller tournaments probably. There will be no large opens held for a very long time. For obvious reasons, right? Large chess tournaments without precautions would be the super-spreading mega-incubators.

I mean the tournaments that I'm reffering to have quite a lot of contestants...

it seems like covid will eventually spread semi-herd immunity among the young.............. and wipe out old people. hey, there was an old star trek (i mean OLD, the original series) where only children survive on the planet. all the older people died, and when the children become adults, they die. i forget of what...some disease. yeah, that'll be our planet in 10 years. a high proportion of old people will be dying off pretty quickly.

so in the us that means social security will be doing fine since there will be far fewer pay outs, and in other countries the old will also be far cheaper to take care of. uh,,,, sorry for the tmi.

You can't post in the forums yet. Play some games!