Why is Lichess called Lichess?

Lichess is a combination of live/light/libre and chess. It is pronounced LEE-CHESS. Hear it pronounced by a specialist.

Live, because games are played and watched in real-time 24/7; light and libre for the fact that Lichess is open-source and unencumbered by proprietary junk that plagues other websites.

Similarly, the source code for Lichess, lila, stands for li[chess in sca]la, seeing as the bulk of Lichess is written in Scala, an intuitive programming language.

How can I contribute to Lichess?

Lichess is powered by donations from patrons and the efforts of a team of volunteers.

You can find out more about being a patron (including a breakdown of our costs). If you want to help Lichess by volunteering your time and skills, there are many other ways to help.

Are there websites based on Lichess?

Yes. Lichess has indeed inspired other open-source sites that use our Source Code, API, or Database.

Why am I flagged for artificial rating manipulation (sandbagging and boosting) or computer assistance?

Lichess has strong detection methods and a very thorough process for reviewing all the evidence and making a decision. The process often involves many moderators and can take a long time. Other than the mark itself, we will not go into details about evidence or the decision making process for individual cases. Doing so would make it easier to avoid detection in the future, and be an invitation to unproductive debates. That time and effort is better spent on other important cases. Users can appeal by emailing contact@lichess.org, but decisions are rarely overturned.

When am I eligible for the automatic rating refund from cheaters?

One minute after a player is marked, their 40 latest rated games in the last 3 days are taken. If you are their opponent in those games, you lost rating (because of a loss or a draw), and your rating was not provisional, you get a rating refund. The refund is capped based on your peak rating and your rating progress after the game.
(For example, if your rating greatly increased after those games, you might get no refund or only a partial refund.) A refund will never exceed 150 points.

What is done about players leaving games without resigning?

If your opponent frequently aborts/leaves games, they get "play banned", which means they're temporarily banned from playing games. This is not publicly indicated on their profile. If this behavior continues, the length of the playban increases - and prolonged behavior of this nature may lead to account closure.

How can I become a moderator?

It is not possible to apply to become a moderator. If we see someone who we think would be good as a moderator, we will contact them directly.

Is correspondence different from normal chess?

On Lichess, the main difference in rules for correspondence chess is that an opening book is allowed. The use of engines is still prohibited and will result in being flagged for engine assistance. Although ICCF allows engine use in correspondence, Lichess does not.

How are Bullet, Blitz and other time controls decided?

What variants can I play on Lichess?

What is the average centipawn loss (ACPL)?

The centipawn is the unit of measure used in chess as representation of the advantage. A centipawn is equal to 1/100th of a pawn. Therefore 100 centipawns = 1 pawn. These values play no formal role in the game but are useful to players, and essential in computer chess, for evaluating positions.

The top computer move will lose zero centipawns, but lesser moves will result in a deterioration of the position, measured in centipawns.

This value can be used as an indicator of the quality of play. The fewer centipawns one loses per move, the stronger the play.

The computer analysis on Lichess is powered by Stockfish.

In the event of one player running out of time, that player will usually lose the game. However, the game is drawn if the position is such that the opponent cannot checkmate the player's king by any possible series of legal moves (FIDE handbook §6.9, PDF).

In rare cases this can be difficult to decide automatically (forced lines, fortresses). By default we always side with the player who did not run out of time.

Note that it can be possible to mate with a single knight or bishop if the opponent has a piece that could block the king.

Why can a pawn capture another pawn when it is already passed? (en passant)

This is a legal move known as "en passant". The Wikipedia article gives a good introduction.

"A pawn occupying a square on the same rank as and on an adjacent file to an opponent’s pawn which has just advanced two squares in one move from its original square may capture this opponent’s pawn as though the latter had been moved only one square. This capture is only legal on the move following this advance and is called an ‘en passant’ capture."

See the Lichess training on this move for some practice with it.

If a position occurs three times, players can claim a draw by threefold repetition. Lichess implements the official FIDE rules, as described in Article 9.2 (d) of the handbook (PDF).

We did not repeat moves. Why was the game still drawn by repetition?

Threefold repetition is about repeated positions, not moves. Repetition does not have to occur consecutively.

We repeated a position three times. Why was the game not drawn?

Repetition needs to be claimed by one of the players. You can do so by pressing the button that is shown, or by offering a draw before your final repeating move. You can also configure Lichess to automatically claim repetitions for you. Additionally, fivefold repetition always immediately ends the game.

What titles are there on Lichess?

Lichess recognizes all FIDE titles gained from OTB (over the board) play, as well as many national master titles. Here is a list of FIDE titles:

If you have an OTB title, you can apply to have this displayed on your account by completing the verification form, including a clear image of an identifying document/card and a selfie of you holding the document/card.

Verifying as a titled player on Lichess gives access to play in the Titled Arena events.

Finally there is an honorary Lichess master (LM) title.

Can I get the Lichess Master (LM) title?

This honorific title is unofficial and only exists on Lichess.

We rarely award it to highly notable players who are good citizens of Lichess, at our discretion. You don't get the LM title, the LM title gets to you. If you qualify, you will get a message from us regarding it and the choice to accept or decline.

Do not ask for the LM title.

What can my username be?

In general, usernames should not be: offensive, impersonating someone else, or advertising. You can read more about the guidelines.

The way of Berserk

That trophy is unique in the history of Lichess; nobody other than hiimgosu will ever have it.

To get it, hiimgosu challenged himself to berserk and win 100% games of a hourly Bullet tournament.

That trophy is unique in the history of Lichess; nobody other than ZugAddict will ever have it.

ZugAddict was streaming and for the last 2 hours he had been trying to defeat A.I. level 8 in a 1+0 game, without success. Thibault told him that if he successfully did it on stream, he'd get a unique trophy. One hour later, he smashed Stockfish, and the promise was honored.

What rating system does Lichess use?

Ratings are calculated using the Glicko-2 rating method developed by Mark Glickman. This is a very popular rating method, and is used by a significant number of chess organisations (FIDE being a notable counter-example, as they still use the dated Elo rating system).

Basically, the system is 90% sure that your rating is somewhere between 800 and 2200. When a player is just starting out, their rating estimate will change very dramatically, potentially several hundred points at a time. After some games against established players the confidence interval will narrow, and points gained/lost per game will decrease.

Another point to note is that, as time passes, the confidence interval will increase. This allows you to gain/lose points points more rapidly to match any changes in your skill level over that time.

Why is there a question mark (?) next to a rating?

The question mark means the rating is provisional. Reasons include:

Concretely, it means that the Glicko-2 deviation is greater than 110. The deviation is the level of confidence the system has in the rating. The lower the deviation, the more stable a rating is.

How do ranks and leaderboards work?

In order to get on the rating leaderboard you must:

The 2nd requirement is so that players who no longer use their accounts stop populating leaderboards.

Why are ratings higher compared to other sites and organisations such as FIDE, USCF and the ICC?

It is not useful to think of ratings as absolute numbers, or compare them against other organisations. Different organisations have different levels of players, different rating systems (Elo, Glicko, Glicko-2, or a modified version of the aforementioned). These factors can drastically affect the absolute numbers (ratings).

It is useful to think of ratings as "relative" figures (as opposed to "absolute" figures): Within a pool of players, their relative differences in ratings will help you estimate who will win/draw/lose, and how often. Saying "I have X rating" means nothing unless there are other players to compare that rating to.

How to hide ratings while playing?

Enable Zen-mode in the display preferences, or by pressing z during a game.

I lost a game due to lag/disconnection. Can I get my rating points back?

Unfortunately, we cannot give back rating points for games lost due to lag or disconnection, regardless of whether the problem was at your end or our end. The latter is very rare though. Also note that when Lichess restarts and you lose on time because of that, we abort the game to prevent an unfair loss. 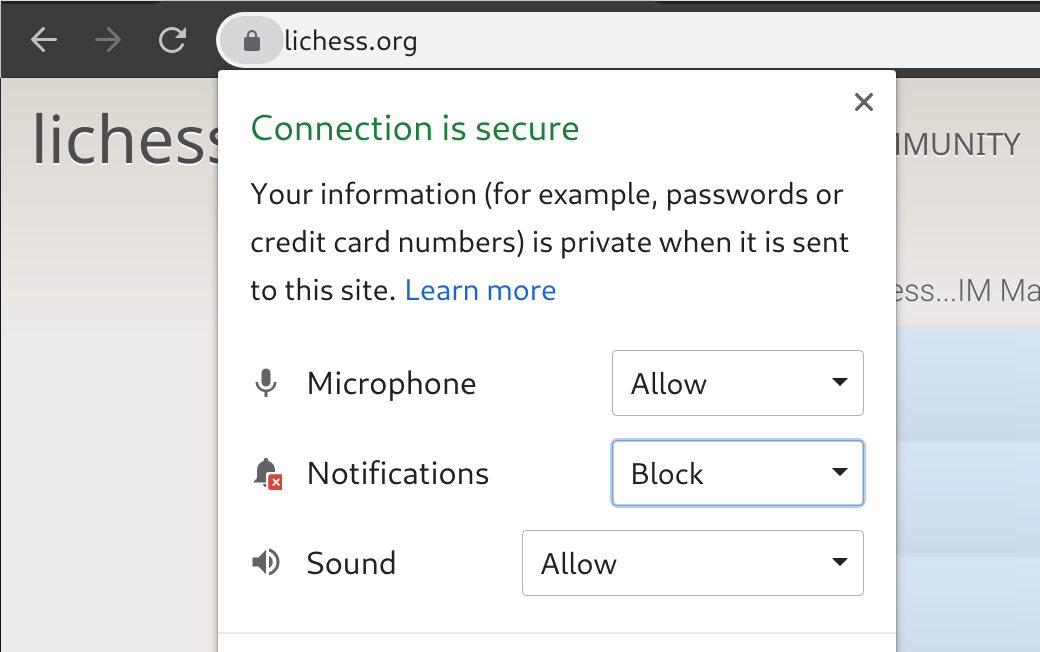 Lichess can optionally send popup notifications, for example when it is your turn or you received a private message.

Click the lock icon next to the lichess.org URL in the address bar of your browser.

Then select whether to allow or block notifications from Lichess.