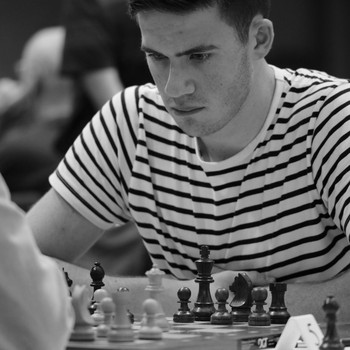 'Attackers may sometimes regret bad moves, but it is much worse to forever regret an opportunity that passed you by' - Garry Kasparov

My name is Matthew Wadsworth. I am a 22 year old IM from the United Kingdom. I graduated from the University of Cambridge in 2021 and am currently pursuing chess full-time.

I learnt to play chess when I was four years old, when my dad taught me the moves. After joining my local club in Maidenhead and playing several local tournaments, I moved up quite quickly to national age group tournaments. I was lucky enough to be picked for England to play at the 2007 World Youth Chess Championship, and have been privileged to play for my country many times at age group level. Two of my standout performances from my earlier years were finishing 5th in the under 12 World Youth Championship in 2012, and becoming under 18 British Champion in 2015.

The next step in my chess career was to push towards the FIDE titles. I crossed the 2300 barrier in 2016, which gained me the FM title. Soon after, I achieved my first IM norm, in the 2015/16 4NCL season. I spent the next couple of years on the hunt for my remaining IM norms, which I achieved at the 2017 Xtracon Open in Denmark and the 2018 Polar Capital Open in Jersey. I finally reached 2400 in May 2019, becoming an International Master a couple of months later. By this point, I was studying Economics at the University of Cambridge, which afforded me the opportunity to play in multiple Varsity Matches. In the 2019 edition of this match, I got to play the former Women's World Champion Hou Yifan and managed to draw with black, to this date probably my best single-game result.

As of October 2022, my rating is 2467 and I have 1 GM norm. In the last few months, I have had some significant playing successes, finishing 5th at the 2022 British Championship and winning my first European open in September 2022 in Nova Gorica, Slovenia.

My chess career so far would never have happened without the support of my parents, for which I am forever grateful. Moreover, my coaches throughout the years, principally Andrew Martin, Nick Pert and Glenn Flear, have been instrumental in showing me the path to chess improvement.

I first started officially coaching in 2019, while a student at university. This took place online, and continued throughout the COVID-19 pandemic. Over the past 3 years I have gained significant experience and learned a lot about the most effective coaching methods. During this time, my students have seen great success, in tournament wins, rating gain, overall playing strength, and enjoyment of the game.

I have been involved in academic mentoring at various points throughout my life, and have been able to see the parallels between learning both in school and over the chessboard. These parallels have only been strengthened by my time at university, in which self-discipline and independent study are paramount.

There are parts of my opening repertoire that I have been playing for almost 15 years and would consider myself an expert in, for example the English Opening with White and the French Defence with Black. Over the last few years, my repertoire has broadened considerably. As for the rest of the game, I would say my greatest strengths are in dynamic, unbalanced positions where both good instincts and precise calculation are essential. I would regard calculation as the single most important skill to develop for any aspiring player to develop. A good calculation process benefits your play in all stages of the game, from early in the opening to technical, late-stage endgames.

I have generally kept to a schedule of weekly, 1-hour lessons with my students, although this can obviously vary and depends on the needs of the student. For each lesson, having a clear theme and lesson objective is key in order to maximise the effectiveness of the sessions. For each student, I will propose a few goals to achieve over a 1-2 month timeframe during our sessions. These goals are tailored to the student and will depend both on what the student wants, as well as what I feel are the most important areas to improve. Every couple of months, we will assess our progress and propose a new set of goals to work towards.
Reconnecting