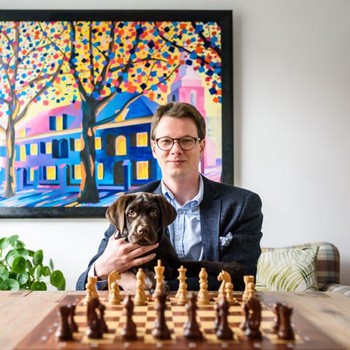 Action isn't just the effect of motivation; it's also the cause of of it.

GM Jan Werle is a professional chess trainer, coach and author. In 2008 he became EU-champion in Liverpool and reached his peak rating of 2607. After finishing his law studies he followed his main passion, chess. He is giving chess lessons online to pupils worldwide, but also in schools. He enjoys to help and teach his students and to watch them improve. He combines the teaching with the playing of tournaments, keeping up his own level.

Jan likes to meet new people and see new places and he began traveling across the globe for chess tournaments at an early age. He has played in all age categories at the World & European Championships, coming 3rd (U16) in 2000 (beating Jakovenko) and in 2001 2nd (U18). He won several strong international open tournaments, such as the Essent Open in Hoogeveen (2007), the Oslo Open (2014) and Ortisei (2016).

He is also an author of several chess books and courses. His latest Opening Course is about the 'Smart Ruy Lopez' : www.chessable.com/the-smart-ruy-lopez-exchange-variation/course/48889/ including a complete repertoire for White against 1.e4, e5.

See my latest Opening Course about the 'Smart Ruy Lopez' : www.chessable.com/the-smart-ruy-lopez-exchange-variation/course/48889/ A complete repertoire for White against 1.e4, e5.

Sharing my positional and tactical understanding in a committed and comprehensible way with my students.

Concerning the structure, I set up a personal training plan based on your personal needs. I pay special attention to how to build up a game as to game analysis. This to learn from your mistakes to avoid them in the near future. Furthermore I try to stimulate my apprentices to solve my exercises on a regulare base.
Reconnecting