yesw2000
Matvey is a outstanding coach, In the time I spent with him, He drastically improved my opening repertoire and my chess abilities overall. He also helps me with my opening preparation before games at tournaments. When I have tournaments, I message him, and he always responds and instructs me with useful information about what to play, free of charge. All in all, Matvey is a outstanding coach that will better your chess, and make chess fun!
devbanana
Matvey is a great coach. I'm visually impaired, and so have to do things a bit differently. Matvey is the only coach I've worked with who is so willing and able to adapt to my particular needs, including extending lesson times, communicating puzzles in a way that allows me to get set up in the quickest time, being patient as it takes me sometimes several minutes to get set up for a new position, and using the lichess study feature in a way that best works with my screen reader. I'm seriously impressed by his ability to adapt and make me feel more able to study the material.

His communication style is excellent as well. He's always quick to praise your progress and let you know you're doing a good job. I never feel stupid in his lessons even though I definitely make stupid mistakes.

His lessons are tailored to work on my biggest weaknesses. He's aware of the games I've been playing and where I've been struggling the most.

In short, he is a superb teacher that makes chess fun.
teddyster
A phenomenal coach! Matvey is knowledgeable, flexible, and an overall great person to learn from.

Knowledgeable: He's a walking chess engine in all phases of the game. He's able to analyze my games on the fly and tell me where I could have improved. He also comes prepared with opening theory so I can learn the most topical variations. His suggestions often mirror the top engine moves.

Flexible: He's able to tailor the lessons according to my needs from week to week. We typically start with a review of my games in the past week, followed by opening theory, middlegame strategies, or endgame practice, all depending on my preferences that week.

Fun: He's just a great guy to be around. There's never a dull moment and my 1-hour lesson flies by leaving me wanting more.
kygreek
I took several lessons from Matvey. He is extremely knowledgable, and he is able to convey his knowledge effectively even to a relative beginner like myself. With his help I learned two new openings as black to reply to d4 (the old benoni) and e4 (the hyperaccelerated dragon). He was able to quickly get me up to speed playing these openings. He is very clear and helpful and able to provide materials for students to try on their own in between lessons to accelerate improvement. I highly recommend him as your chess coach!
greysensei
I have been training with Matvey for about 1 year. In that time, my ratings in rapid and classical have increased by about 300 points.

Matvey has helped me learn several core openings (e4 with white and responses to e4, d4, and c4 as black). Knowing these openings has helped me identify middlegame plans quicker and has given me more confidence and speed in my play.

We also have a system where Matvey helps me prepare for my opponents in the lichess4545 league. In this context we usually try new openings tailored to my opponent and after each game we deeply analyze the whole game. This exposes me to a larger variety of positions and helps broaden my chess knowledge.

Matvey also gives me challenging homework which is not just puzzles. They are middle-game and endgame positions, which require calculating many lines. Often a problem is in the format: does move x work? And I have to either show the lines that work or show why it doesn't work. This is more realistic than tactics puzzles, and often there is a core concept at the heart of every homework position that I learn as a result.

I find lessons with Matvey enjoyable and would definitely recommend him to any student.

NathanielW
I have had lessons with Matvey for about a year. Not only is he a very strong player, he is a very talented teacher. Each session is fun and challenging at the same time. Lessons are always personalized and he works very hard on the material and chess in general. Since studying with Matvey I have improved in all areas of chess. He is an excellent coach, highly recommended!
andyshih12
I have been taking weekly lessons with Matvey for the last 6 months, and they've been absolutely wonderful. He's extremely knowledgeable about chess, of course, and thinks amazingly quickly on his feet.

But what stands out about Matvey is how much he cares about his students. His lessons feel very personal -- he helps me pick out an opening repertoire, selects exercises based on my weaknesses, and adapts the lesson plan based my own suggestions too. On top of this, Matvey has excellent communication skills, and speaks fluent English.

Working with Matvey gave me the confidence to play my first OTB tournaments (and the skill to win some of them too!). I highly recommend Matvey as a coach to anyone who wants to improve their chess.

WFM Marepant
I’ve been working with Matvey for over a year now, he’s a great coach! He helped me to become a titled player and win the world championship in my category.

His lessons are excellent and catered to me. I feel welcome to send suggestions of things to go over, to show off nice games where I showcased what I learned from him, to send games where things haven’t gone my way and he can pinpoint areas to work on.

Matvey is the perfect coach for the serious student!
Corvisquire
I have been training with Matvey for a while now, and he have helped me improve and develop my chess that i was able to win my first tournament recently. 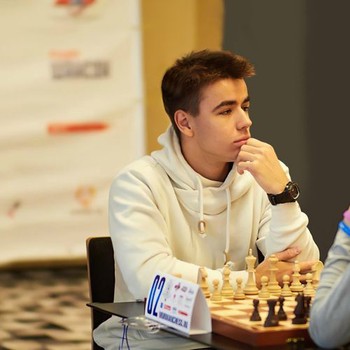 Helping you improve with ease and joy. My students have results.

My greatest achievement is winning the 2017 National Championship U19 (blitz). Others include:
International Master Title (2020).
Champion of numerous Russian regional tournaments in all ages from 2008 to 2018;
Winner and participant of numerous tournaments in Norway, Finland, Czech Republic, Russia, France, Spain, Latvia and the Netherlands, which has given me an incredibly rich experience of different styles of play.
I have been playing chess for 16 years now. For this time I have tried numerous openings for both sides and worked out some of them to an exceptionally good point. I am currently a member of a Norwegian Chess Club of Alta (since 2016) and a Finnish Chess Club of Jyväskylä (since 2018).

I am a twitch streamer but I do not stream very often. I have commented on chess matches of other players for fun and my games while playing.

I am incredibly good with kids. Strong sides of my coaching are openings and opening subtleties, positional understanding in the transition to the middlegame as well as various endgame thorough studies.

I use material from my personal experience as well as from various books of trustworthy authors. The methodology is absolutely personal that gets worked out in the very beginning of working with a student. As an active player, I always follow up-to-date novelties and the latest improvements found in chess.

I use all kinds of social networks like WhatsApp, Facebook, Instagram, skype and Vk which makes it very easy to communicate with me. I always follow my students' games live when there is an opportunity.
Reconnecting