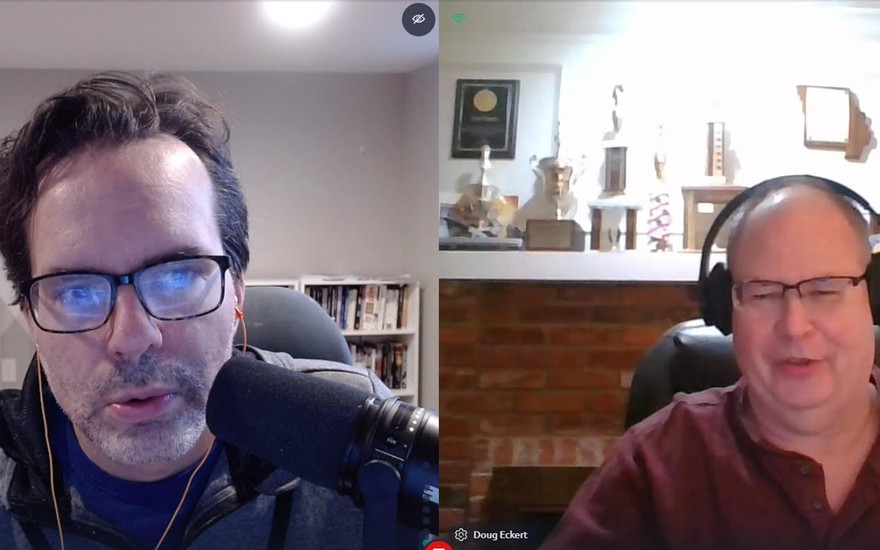 FM Doug Eckert joined me from his home in the St. Louis area

NM PerpetualChessJan 14, 20223,385 views
TournamentOver the board
Chess and Life Lessons from the Most Recent "Adult Improver" Perpetual Chess Podcast

This week’s Chess improvement-themed episode of The Perpetual Chess Podcast, features 3 Chess Masters who are competing and training regularly, with hopes of making the significant jump "From Master to IM." For context, International Master (IM) is the second highest title in tournament chess, Chess.com estimated that there were 3,800 active IMs in the world in 2020. While you yourself may not be a tournament chess player (yet!), the lessons from such a pursuit can be applicable for anyone trying to improve in any challenging endeavor.
My guests were FM Doug Eckert, NM Evan Rosenberg, and FM Dalton Perrine. Each guest is accomplished both over and away from the board and each had excellent advice to share. And let's be real, if, like Evan, you are a 38 year old working dad and you are hoping to go from 2100 to 2400 FIDE, the task is daunting, and you might not make it. But that's what makes the pursuit all the more worthwhile!

Here are 3 of the highlights of the conversations for me:

My jaw nearly dropped to the floor when 57 year-old FM Doug Eckert told me “ I'd like to spend more time on chess improvement than I do. But you know, being a little bit older, I find that I'm probably limited to about 30 hours a week.” Say what now ? Of course, 30 weekly hours of chess study is a lot for anyone, but a fact that should be highlighted is that Doug has earned the right to spend his time so deeply ensconced in the 64 squares. In his younger years as a corporate CPA, 60 hour work weeks were quite common. So Doug is no stranger to hard work, and those long work weeks helped enable Doug to retire 3 years ago at age 54.
In retirement, Doug has discovered that he has plenty of time for chess, but not as much energy. Doug had actually expected to spend even more than 30 hours studying chess each week, but he has determined that with the dedicated, deep calculation work that is necessary for improvement, there is a point of diminishing returns to his daily study. In our interview, Doug poignantly described a sort of race against time where he is working hard to improve his chess calculation abilities, but he feared that his growth may be inhibited by a slow but persistent age-related decline.
Evan and Dalton, like most of us, are not retired, so they can’t match Doug’s 30 hours a week of study, but they both still manage to put in an impressive amount of study time given their own life circumstances.
https://lichess.org/study/EfSRV8CL/2ZMnfMiC#33

An overall theme of all 3 interviews was just how important the psychological side of competitive chess is. FM Doug Eckert mentioned this as a theme often raised by his friend and trainer, GM Jacob Aagaard. FM Dalton Perrine also highlighted a similar point, when he mentioned a question frequently raised in his work with his coach,, GM Sam Shankland. Sam taught him,

“Maybe a certain move you're thinking about looks good, but it looks like the opponent has some kind of response that would be problematic. A good question to ask is, “What if I do it anyway?” - GM Sam Shankland (as told to FM Dalton Perrine)

This will to crash through walls when calculating strikes me as a microcosm of chess improvement overall. This “will do” attitude has certainly worked well for late-blooming 2018 US Champion, GM Sam Shankland.
The interview that highlighted the psychological ups and downs of tournament chess most of all was that of my friend, NM Evan Rosenberg.
Evan has beaten some GMs and was the only guest with an IM norm already under his belt. But he has been plagued by inconsistency, and by his own admission, had a “crappy” finish to his most recent serious tournament. (OK, he actually used a synonym for crappy.) Evan went on to say:

"One of my biggest weaknesses as a chess player is the tendency to finalize the result of my current game while I'm still in the game, and then to kind of hypothesize beyond that, right? So I'll think, all right, so after I win this game, how's that going to affect my standing in the next round? Meanwhile, I'm still playing the game! Like it's still right in front of me, and I've somehow convinced myself that I've already won or that the game is over."- NM Evan Rosenberg

Whether it’s time trouble, sleep issues, physical fitness or a unique psychological pitfall like Evan describes, there is a good chance there is work away from the chessboard that can help your competitive chess game. Often this type of work on “the mental game” is the most challenging work of all though, or, um, so I hear.

In speaking with Doug, Evan and Dalton, I was struck not just by their own sacrifices, but those of their significant others. Dalton described how his wife arranges much of his travel schedule. Evan’s wife makes herculean efforts to solo parent their 3 year old when Evan goes off to a chess tournament.. And each player highlighted the help that their trainers provide in their journey. And let’s not forget about the financial cost of competitive chess which if you are married may be borne jointly. Played online, chess can be a relatively inexpensive hobby, but once you are traveling to tournaments the calculus changes quickly. So whether you have a significant other or not, you are well-served to appreciate those who help enable your own improvement efforts. Common contributors to an individual’s journey to chess improvement include family members, trainers, peers and training partners. And if you are young, and/or unattached, it might be a good time for you to prioritize chess study or whatever personal project is important to you, before increased life responsibilities appear.

So there you have 3 of the things I am thinking about from these illuminating conversations with these chess strivers. There were many more lessons to learn in the combined two hours of conversation, so be sure to listen to the podcast (or check out this unedited, AI generated transcript of the episode) if you’d like more life/chess lessons! Thanks for reading and I will catch you all next time! 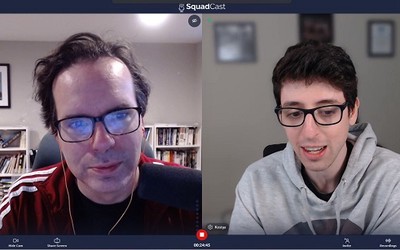 What the Sensei taught Me 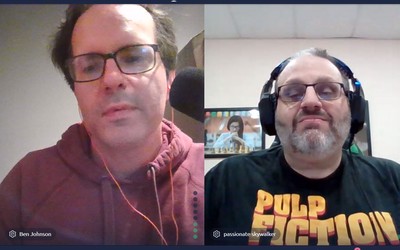 The Most Popular Perpetual Chess Podcast Episodes of 2021

Which chess stories did people most enjoy hearing?Jan 6, 2022
Reconnecting