no round robin tournaments on lichess

Then I suggest the following experiment: since you probably come from Germany, I have seen this from your teams, you might have the software Swisschess. If not, you can download an appropriate software. Simulate a tournament with 10 participants and 9 rounds in the swiss system. In each round you let the player with the higher rating (DWZ or Elo, it doesn't matter in principle) win. I can't wait to see if you can make it all nine rounds! I tried this once and after 7 rounds no further pairings could be calculated. You must also use Dutch System, as in Lichess!

And you still haven't shown me the crucial passages in the Handbook of FIDE § C. 04!
Can't wait to read it!

@kleineme And please have a look at this post lichess.org/forum/lichess-feedback/swiss-tournaments-are-on-lichess?page=19#190 Independently of me, someone else did a similar experiment! With similar results!

@odoaker2015 #42
Right, that's one of the edge cases. Here it doesn't work out due to the same reason as for Lichess tournament lichess.org/swiss/UFyKy5jN, as explained by TacticalBert in lichess.org/forum/lichess-feedback/swiss-tournaments-are-on-lichess?page=22#211

Due to the pairing algorithm, during the first five rounds, from the block of players A, C, E, G and I, all have played against the block of players B, D, F, H and J. Now all players have be to paired against opponents from their own block, which is not possible. When we do A-C and E-G, we have no opponent for I.

When we do the same with 8 players, we don't run into this dead lock, so we get 7 complete rounds with all games drawn: http://www.isewase.de/files/test8_remis.swt

Sometimes I have to play a couple of games ;-)

It's not as easy as to point to one single paragraph, you have to read C.04 as a whole.

You have to start with the basic rules in C.04.1, especially d to g. The concrete rules for the Dutch system are laid down in C.04.3. There are three absolute pairing criteria, see C.04.3, C.1-C.3, which are not be violated (and even for those there are exceptions). Additionally there are a couple of so called Quality Criteria, see C.5-C.19, which can be discarded when you else don't come to a pairing.

@odoaker2015 #44
For our purpose it's irrelevant whether you create the initial ranking list based on Elo or not. I'll send you a PN.

Currently, this topic shows a development very similar to:

What happened in the above-mentioned topic?

At this moment, this topic is in transition to phase 3 and 4. We would save a lot of time and headaches if the Lichess developers decide to jump straight to step 6.

Please, Mr. Thibault Duplessis (@thibault) and the Lichess development team, reconsider your position regarding the Round Robin tournaments. I know that you are very busy with many projects, but the professionalism that you demonstrated by implementing Swiss tournaments so quickly shows that Lichess is up to any challenge.

I trust you and the words you initially posted on lichess.org/swiss: 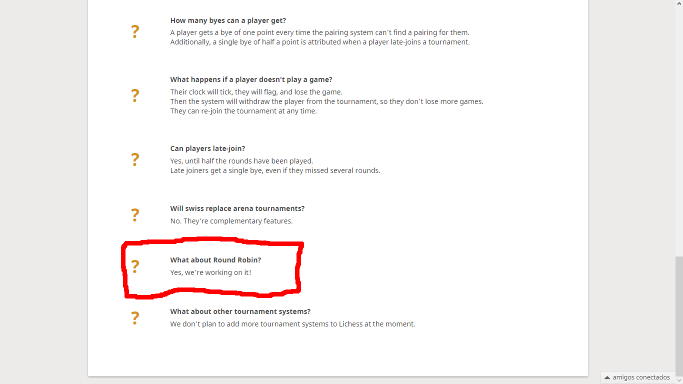 #49 There's a difference here: I caused a ruckus advocating for Swiss pairings and dare not repeat that. Other developers' time isn't mine to offer, and I severely doubt anyone could find a solution which scales well.

I was convinced that Swiss was a good idea; I am convinced that Round Robin is a terrible idea. Absent very strong evidence (i.e. working tests and working code) it is very, very unlikely my mind will change in the foreseeable future.