Can we please clarify the rules regarding the use of books in correspondence chess?

After speaking with a mod, the answer I've gotten is that there is no answer. I'd say that, as long as you aren't outright using an engine, any opening book would be allowed. Besides, correspondence isn't well-maintained on Lichess and is harder to moderate anyway. 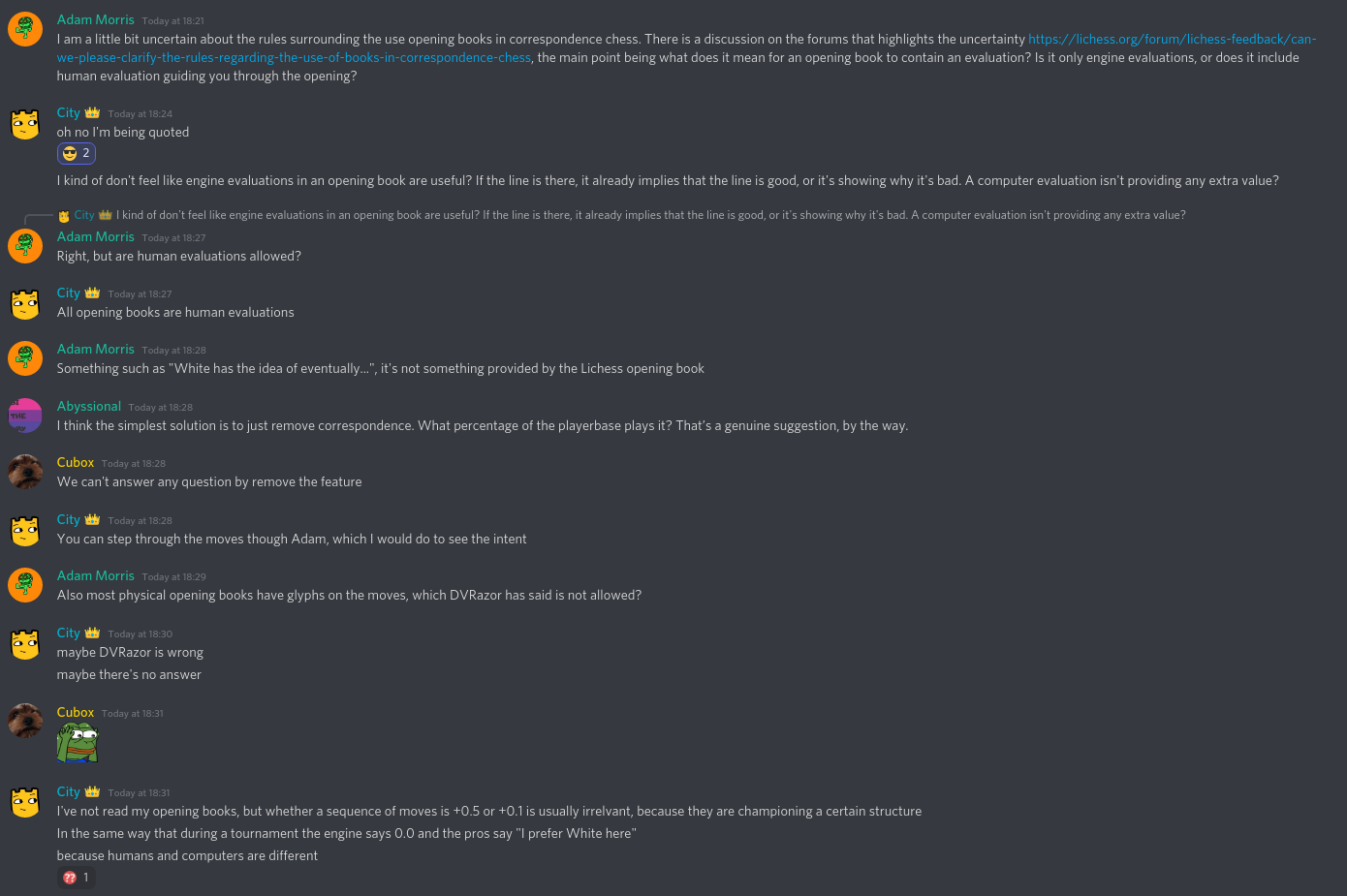 Why do the rules specifically say "opening book"? Dvoretsky's Endgame Manual is not an opening book, but it seems bizarre to me to disallow it while allowing books like "Winning with the Najdorf". IMO at the very least the rule ought to be reworded to say "books (such as opening books)" or something of the sort, or else specifically disallow books that are not opening books.

I must say I don't quite understand @dvrazor's comment quoted in adamimorris's second post. I *think* the intention here is you're not allowed to use a database of openings that has a bunch of engine evaluations automtically tacked on to each position or line. But surely we can't ban a book just because it happens to say "Stockfish gives this position +0.6" somewhere in it.

I don't think it is practical to ban books of any kind for correspondence games. These games can take several months if both players take their time. Are they then supposed to not work on their repertoire with any book or course that contains a line they have in a conference game? Requiring this degree of forced ignorance would seriously put me off from correspondence.

Anything that isn't just using an engine should be fine. I'd like to amend my earlier statement, I believe endgame books maybe be allowed.

It actually does not matter too much as these rules are almost unenforceable, and I'd say it's rare that you will be marked just from using the "wrong" opening book.

@Mahith1708 Lichess has no plans to remove correspondence anytime soon.

I think it's weird to interpret the rules as implying you can't use Dvoretsky's endgame manual or middlegame books. Did anybody besides the OP say those were disallowed? Those are far less useful than opening books (unless you have your exact endgame as a position in the book - which is certainly possible). I think one important limitation of the books is that they're quite finite and static. They cannot give an evaluation of every possible deviation from your position as an engine can. They can't update when a stronger engine comes out or somebody directs it to look deeper.

Sorry, it wasn't the OP saying Dvoretsky was disallowed. My apologies.

"Opening book" has a very specific meaning in chess, and it's not referring to an actual book book.

It refers to a type of database (or list) of possible openings and their main lines. Literally just a list of possible recommended moves (or recommended lines) from a given opening position. www.chessprogramming.org/Opening_Book or en.wikipedia.org/wiki/Chess_opening_theory_table (another way to refer to an opening book)

That is why lichess allows the opening explorer during games.

But physical books that talk about openings and analyze them don't fall under that definition. Those would kinda fall under this definition: en.wikipedia.org/wiki/Chess_opening_book

Wikipedia's wider interpretation of the term doesn't appear to be what is intended in the rules.

IMO, the definition of "opening book" should be clarified a little better in the rules since it is causing this much confusion.

As is probably evident from this discussion, there's a lot of different opinions here. This is because it was never decided, hurray!

We're currently working on a new version of the terms of service though and will include clarification on this point.