Is Pedro Frazão connected with lichess?

This person runs the(?) Facebook lichess page, does he have any authority on this site (mod/developer/etc)? And, if not, is that page monitored by lichess?

Which page are you referring to?

Hmm, a bit more searching, looks like it's a closed group. But, he is the only visible moderator, and the name is "lichess.org". I'm thinking that I'm answering my own question. lol

No I dont have nothing to do with lichess. I just a user.

This is part of the description of the facebook group 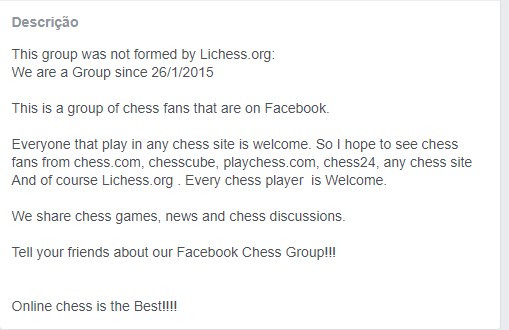 You can join in the group. We are more then 7000 right now

Why did you decide to use the name Scala? It may be intentional but a great deal of this site is written in the Scala programming language!

I use the chess nick before language Scala was born :)

This is the story about my chess nick

I live in a town called Santarém which is a town from the roman period. Santarém in that period was called "Scalabys" and I remove the “bys” words from “Scalabys” and "Scala" appear. So my nickname is in honor of my hometown, Santarém.

Now, There are many things called Scala in Santarem.

And yes, sometimes people ask me if I know programming or if I am one chess engine :)

I left the facebook page, I don't believe it is a good representation of this site.