How to extract the CLK tag of PGN

Hi,
I would like to know how I can extract the clock information ( time remaining ) from PGN file using a program.
Python is preferable. I have stumbled on a easy python program python-chess.readthedocs.io/en/latest/pgn.html. I am struggling with how to extract clock information from PGN file. Thanks in advance.
1. d4 { [%clk 0:02:00] } 1... d5 { [%clk 0:02:00] } , I am able to extract the moves using "for move in first_game.mainline_moves():"
and this spits out the entire game as string - first_game.mainline(). I would like to know how to systematically extract the move-no, clock information.

I'm not really familiar with how pythonchess deals with pgn files, but if this feature doesn't exist in the library, maybe you can read the pgn as if it were a .txt file and extract the file manually (find all the occurences of "%clk" and the following text will be the time. Stop when you reach a "]").

If you turn to the source code, a game node is defined like this:

Pgn comment of a node can accessed as node.comment.

If instead of mainline_moves, you iterate mainline:

then you get an interator for the nodes, rather than moves and you get the comments using something like:

Once you have the comment, you have to cook up a regular expression to extract clock information from the comment.

dir() and help() was useful as usual

(if you need speed then @classicalMpk 's approach will probably be faster.)

I cooked up a regular expression using the online Python terminal: 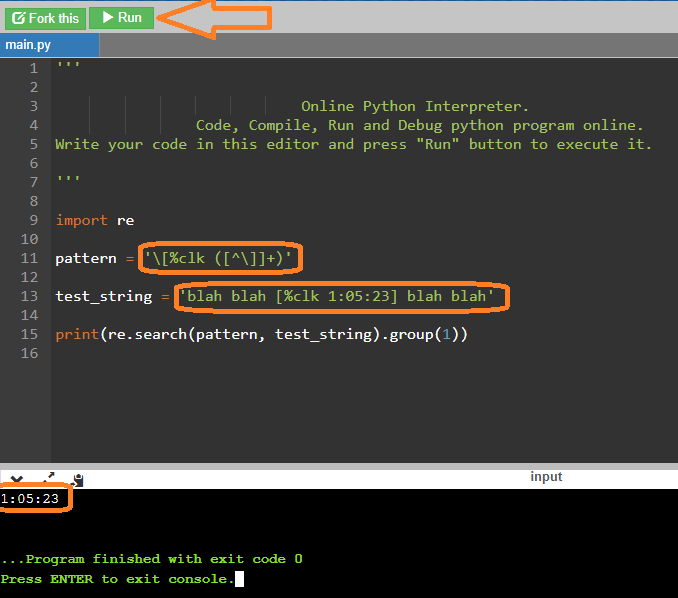 i wonder if these comments can go over two lines.

Ok, Then he would probably first do comment.replace('\n', '') and then apply your regex. Depends on what he wants to do exactly.