Theoretical Pawn Endgames - All You Need to Know U2000 Level

GM GABUZYAN_CHESSMOODDec 6, 20221,205 views
ChessEndgame
What are the most important King and pawn endgame positions that you must know?

Once my student came to me and said:

“Coach, the Philidor endgame is easily winning, all the modern theory is wrong.”

I smiled and got curious at the same time. And while checking the game, I saw how things went.

The thing is the following pawn endgame is a drawish one and none of the players knew this. 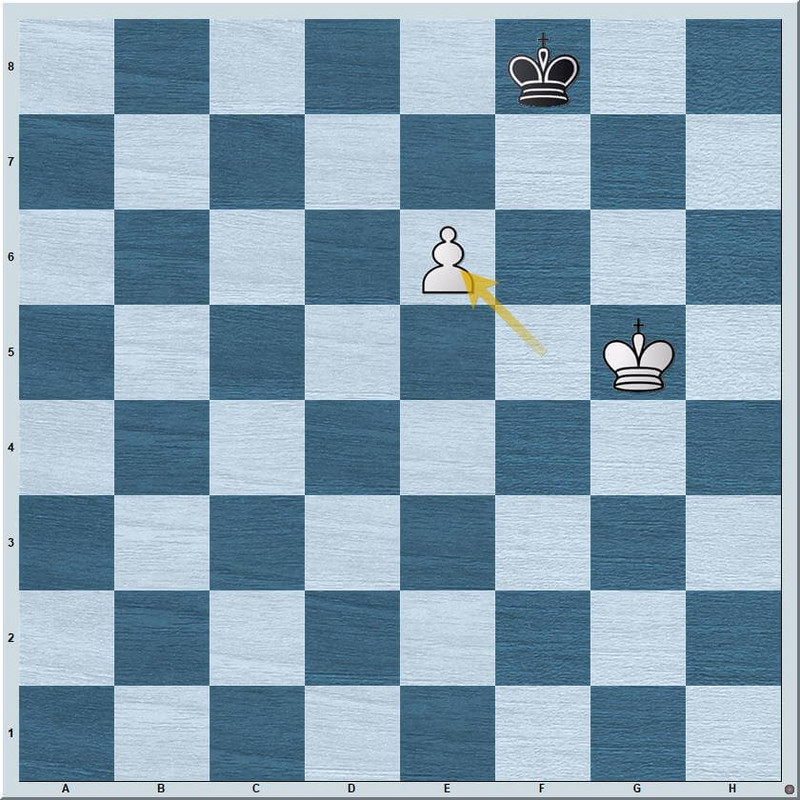 After our analysis, my student asked, “Should I work on my Rook endgames now?”

While it’s good to improve the Rook endings, we need to start from the fundamentals – The pawn endgames!

Because often when you exchange all the pieces, you’ll be left with only the pawns. So in such cases, you need a good understanding of the pawn endgames to make the right decisions.

Take a look at the study below. 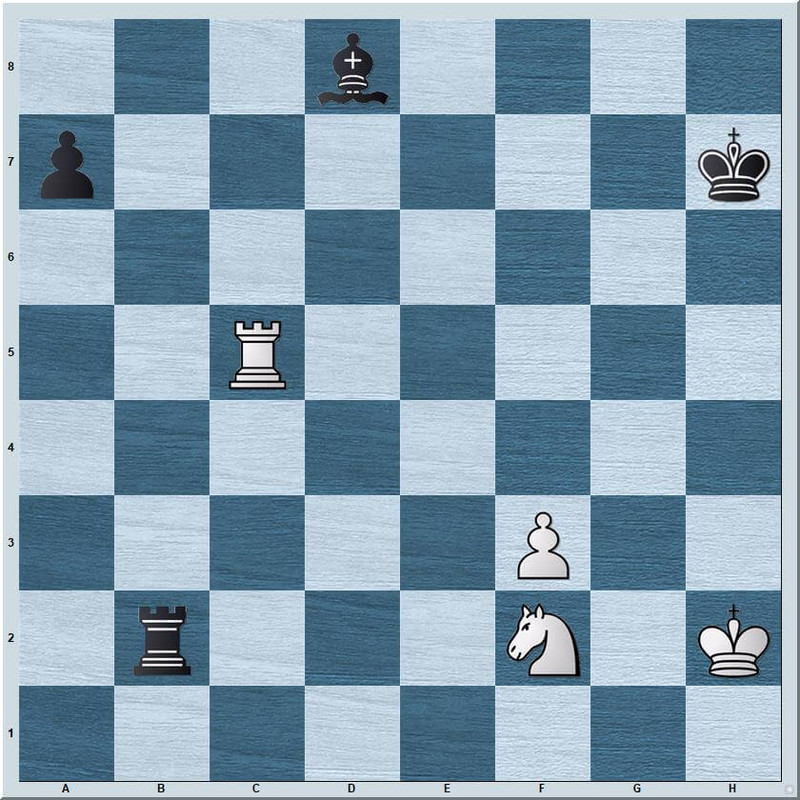 The Knight is hanging + the Black Bishop is creating threats through the diagonals.

Can you solve it?

If yes then you can be proud, also nothing wrong if it’s difficult.

The thing is that here the final solution depends on the knowledge of the pawn endgame. While it might sound crazy now, in the end, we’ll come back to this position and there’ll be a smile on your face when you find the solution.

Through this article, you’re going to learn some of the most important concepts to play King and pawn endings, including:

I’ve heard so often that many students are trying to avoid concrete pawn endgames as they feel uncomfortable and don’t know what to do. Do you have the same issues?

After understanding the strategies shared in this article you won’t be struggling with that, and the transition to pawn endgames will not scare you anymore.

There are some positions that you’ll need to memorize. I got you on this one At the end of this article, I will share an easy technique, which will make the process easier even if you don’t feel comfortable with memorizing.

Let the journey begin with one of the most fundamental rules of King and pawn endgames.

Promotion is the main goal in the majority of endings. We’ve covered why this is the case in our endgame roadmap article.

So the first thing we should consider is can a pawn promote without any assistance? The enemy King will try to stop it. So in many positions, you’ll need to evaluate if a pawn can Queen on its own or if it will be stopped. This is where the square rule comes into the picture.

Before I explain the rule, take a look at the position below.
The pawn wants to promote and the Black King wants to stop this.
In this case, the King is too far, and the pawn easily turns into a Queen. 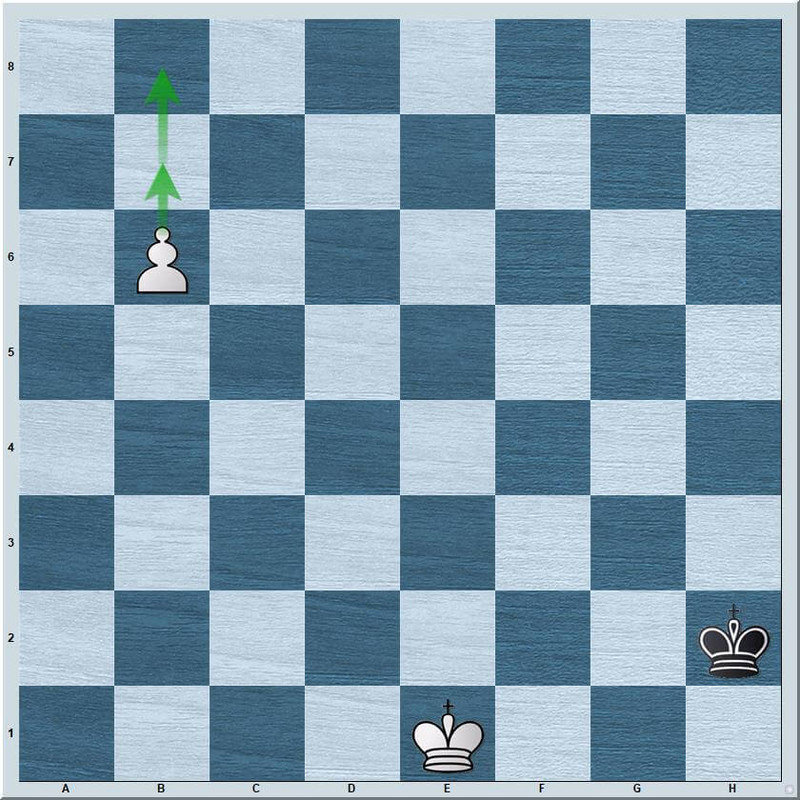 So, what are the criteria to understand if the King is on time or not to stop the pawn?

We’ve seen that if it’s White to move and Black is a little slow to react, the a4-pawn promotes.

Now take a look at the image below. 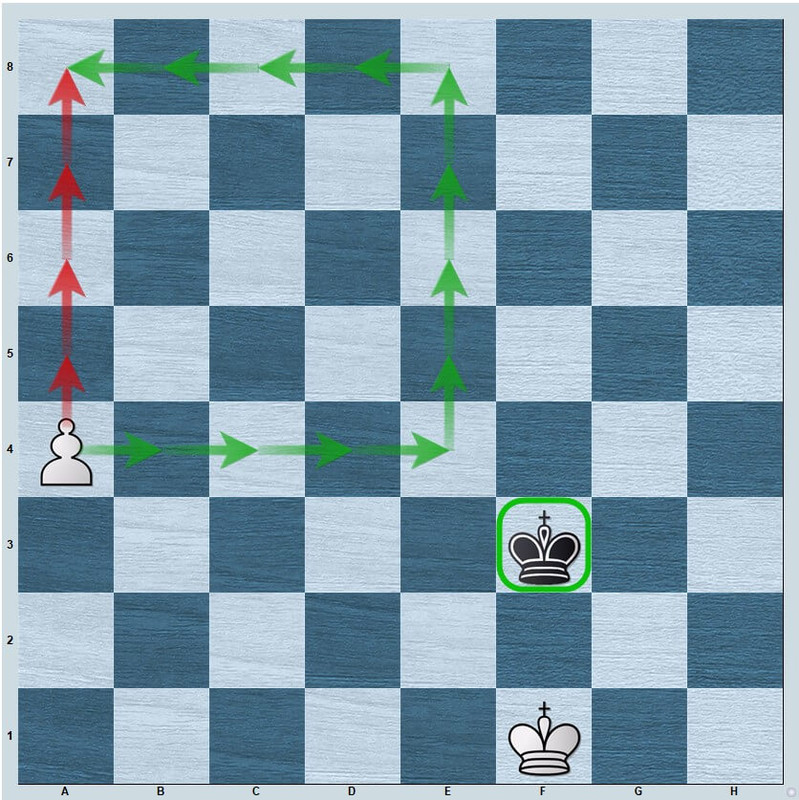 You’ll see a square – this will decide whether the pawn promotes or the enemy King stops it.

You might wonder how I created this square. Here’s how:

Now here’s the magical part of this square – If the Black King can step inside it, they will stop the pawn. If not, then the pawn will promote. You can try it out yourself over the board

In the above position, 1...Ke4 draws the game as the King steps into the square.

Now that you know the square rule, look carefully at the 4 positions below. You can see several examples of the King in the square stopping the pawn. 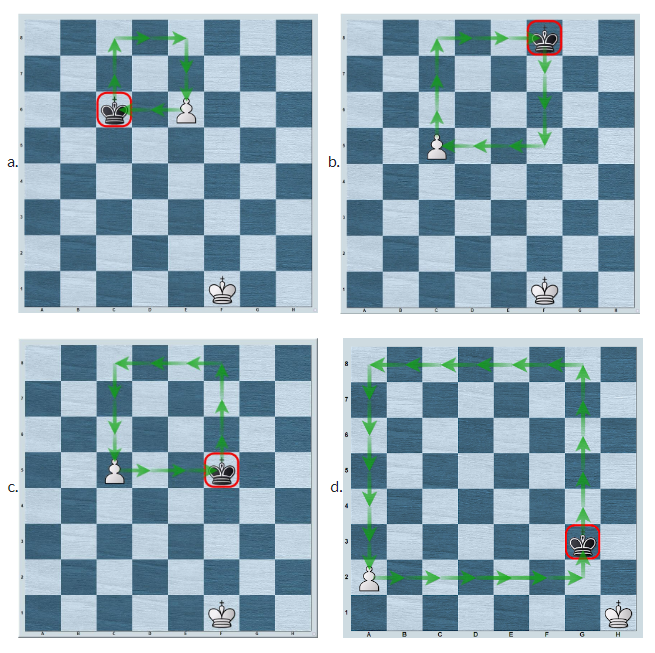 In all of these positions, it doesn't matter whose turn it is, as the King is in the square and on time to stop the pawn promotion. Or does it?

Position d. is lost if it’s White to move! Why?

Champions, as we have seen, the square rule is easy to remember.
If the King gets in, then the position is drawish.
But be careful in your calculation when the pawn is on the starting square.
Moving on, whenever our pawn isn’t able to promote itself, it’s asking for help. This brings us to the next key concept.

When I was 5 or 6, a dog bit me. So for a long while (not anymore ) I was afraid of dogs. In my neighborhood, there was a homeless dog, which turned my school-going routine into a challenge. Every time it stepped in front of me, it would create an obstacle.

Luckily my dad used to take me to school. So whenever we would face the canine my father would step in front, shielding me from the dog, while clearing the path to move forward.
(fun fact - once I missed school when I couldn’t overcome the dog alone).

This section isn’t about my childhood fears though. It’s about the King supporting the pawn to get promoted. The situation is very similar to the story I told you above and soon you will understand why.

Logically the opponent’s King in front of the advancing pawn will try to block the pawn. There are attacking and drawing techniques that we will learn later.

Before that let’s understand the main concept.

What can we understand here?

The King wants to go in front of the pawn to control the squares for the pawn to move ahead. And logically the defending side wants to prevent the King from going ahead of the pawn.

King on the 6th Rank

In both positions below we saw White’s win with 1.Ke6, however, the pawn push also wins. 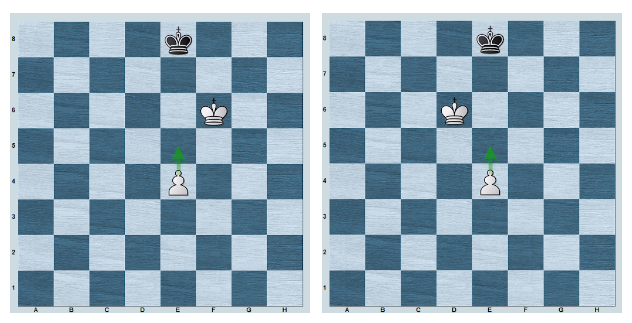 While pushing a pawn, White gives up the opposition, but there is magic regarding the King located on the 6th rank.

Things are a little different if a pawn is on the 6th rank with the King.

We touched on this concept briefly in the previous example. Opposition occurs when the Kings face each other with only 1 square between them. Often in such cases, the side that has to move is at a disadvantage.

For example, have a look at the position below. 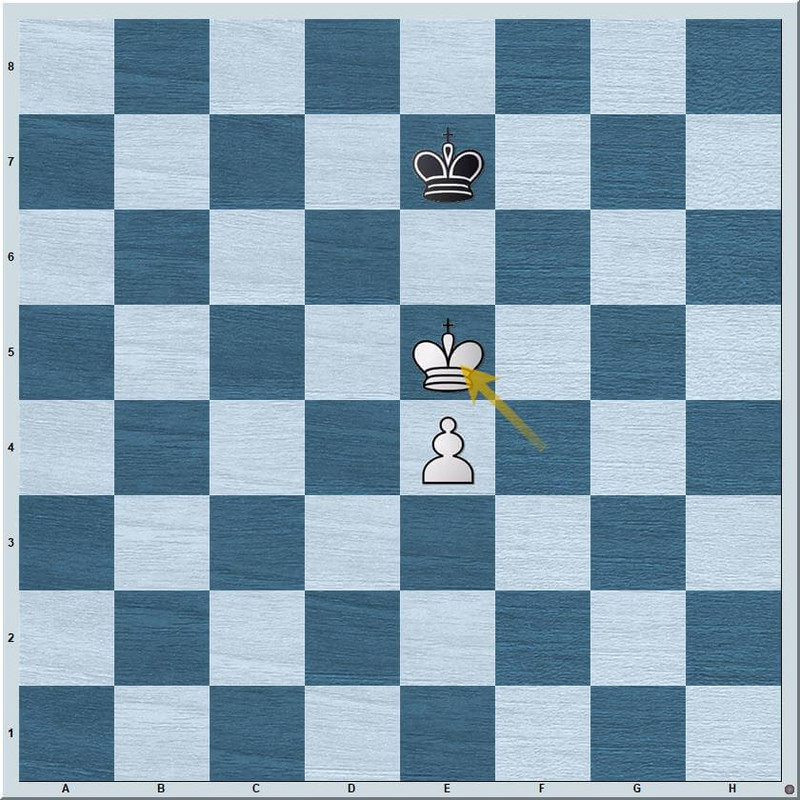 It’s Black to play. Once their King moves away, the White King gets control of the key squares and promotes the pawn.

On the other hand, opposition can be used by the defending side to draw the game. How?

For that, have a look at the position below.

The above position looks quiet, and it's fine if you know what to do.

Now that you know opposition, there’s another important concept you should know.

A zugzwang is a situation where one side is at a disadvantage because it’s forced to move. This is a very powerful weapon, especially in pawn endgames.

Let me show you an example.

And if it’s White to move?

This means opposition matters a lot and changes the game's result accordingly.
Now let’s look at positions where the sides have a pawn each.

In this scenario, there are 2 possible conditions.

In the diagrams below pawns prevent each other from promoting as they are on the same or neighboring lines. Such positions are drawish, as the Kings defend the pawns.

However, the situation changes if the pawns are fixed in front of each other.

The position is drawn as Black stops the White king. This is also the right fighting technique where you stop the enemy King from invading.

Now let’s imagine that in the last position from the game above it was Black to move. Is it still a draw then?

What do you think, will the situation change if we shift pawns back for a rank?

Before I explain the above concept, I’ll give you a position to solve. It’s White to move.
Be careful, I am in a tricky mood today 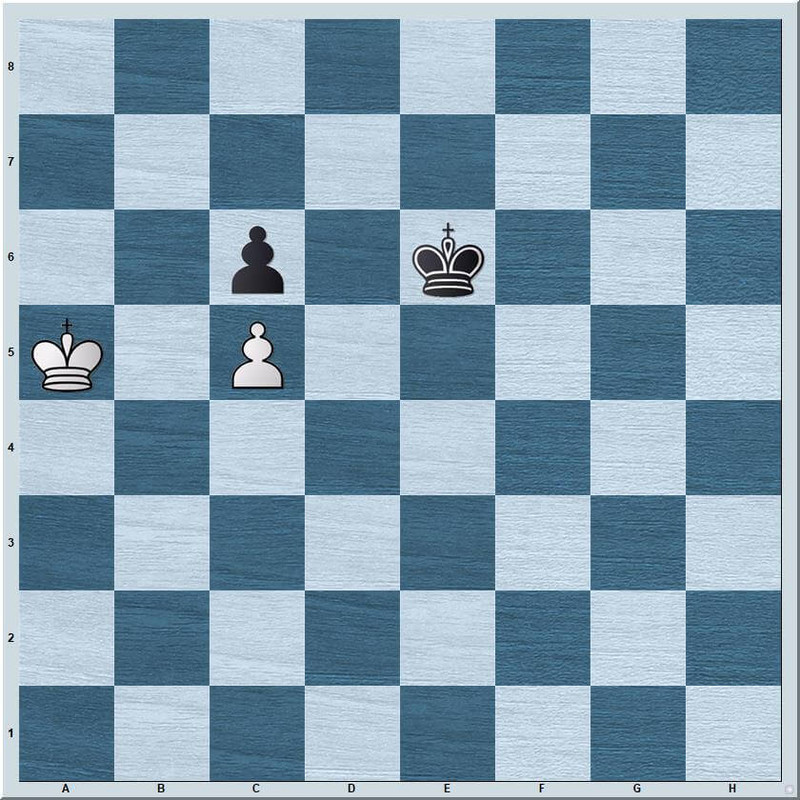 The thing is the shortest path is not always the best, and sometimes is the worst

Why? Because b6 and d5 are mined squares for White and Black respectively.

So what are mined squares? Think of them as landmines – The side which occupies these squares first, ends up in a zugzwang which eventually deteriorates their position.

These were all different examples where we tried to win the opponent’s pawn because it was an obstacle for our pawn to promote.

Now we’ll also see situations when the pawns aren’t blocking each other’s path and are free to run on their own to the final rank.

Like in any other race, the goal is to be faster than the opponent.
Have a look at the position below – Which side’s pawn will be faster?

Logically if one of the pawns is more advanced, that side promotes faster. But once again, be careful with the pawn’s ability to jump 2 squares from the first rank! 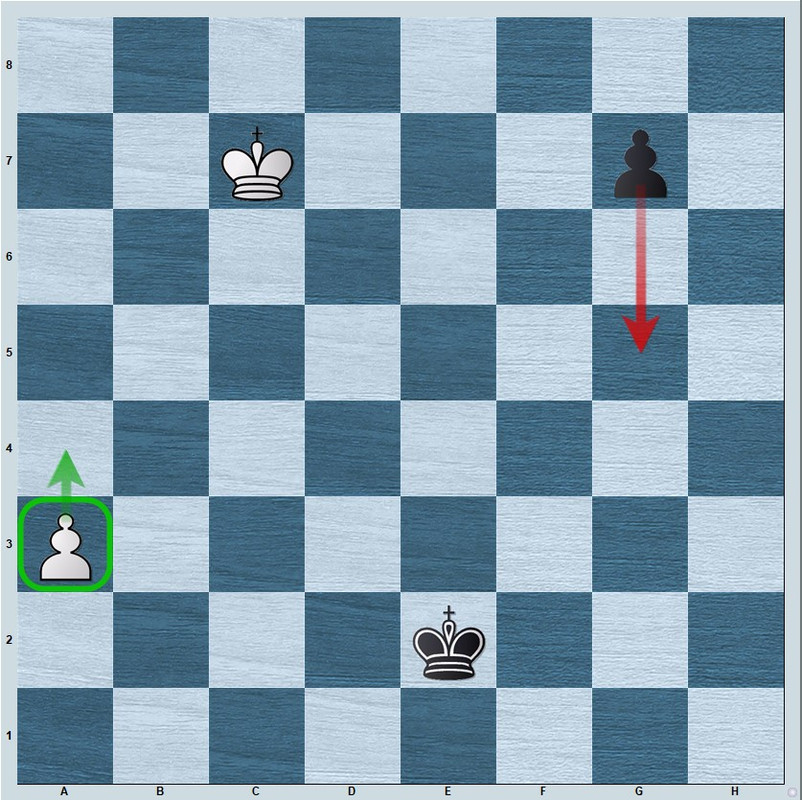 Even though the White pawn is ahead, both pawns will get promoted at the same time in the above position.

In a pawn race, different situations can occur. For example in the position below both sides promote at the same time. Does this mean the position is drawn?

In pawn races, always be alert to these kinds of tricks.

My tricky mood is back

What’s the evaluation of this position? 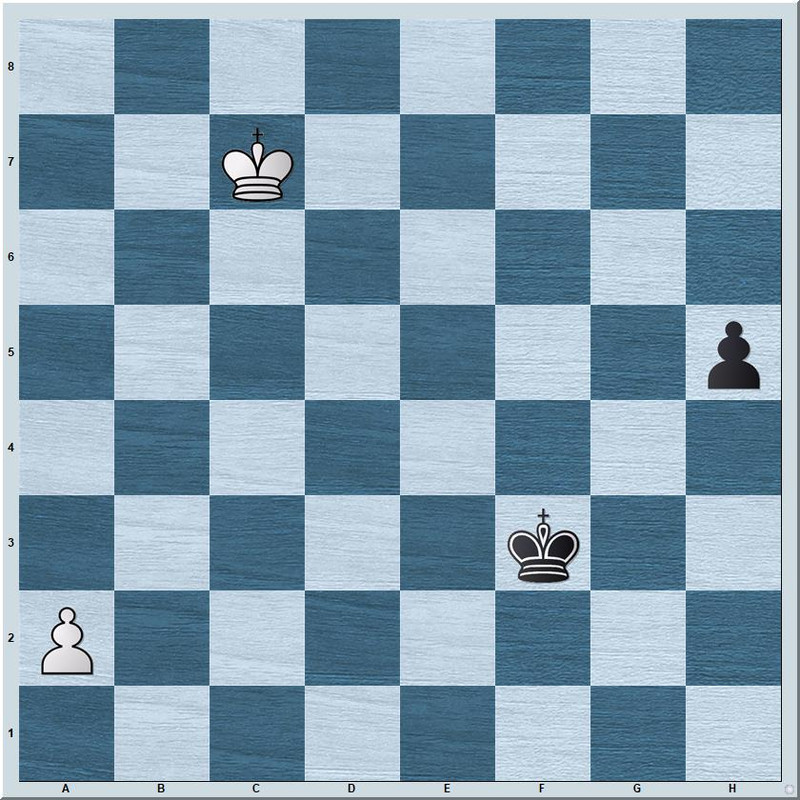 If you said White wins, you’re wrong. The position was actually a draw 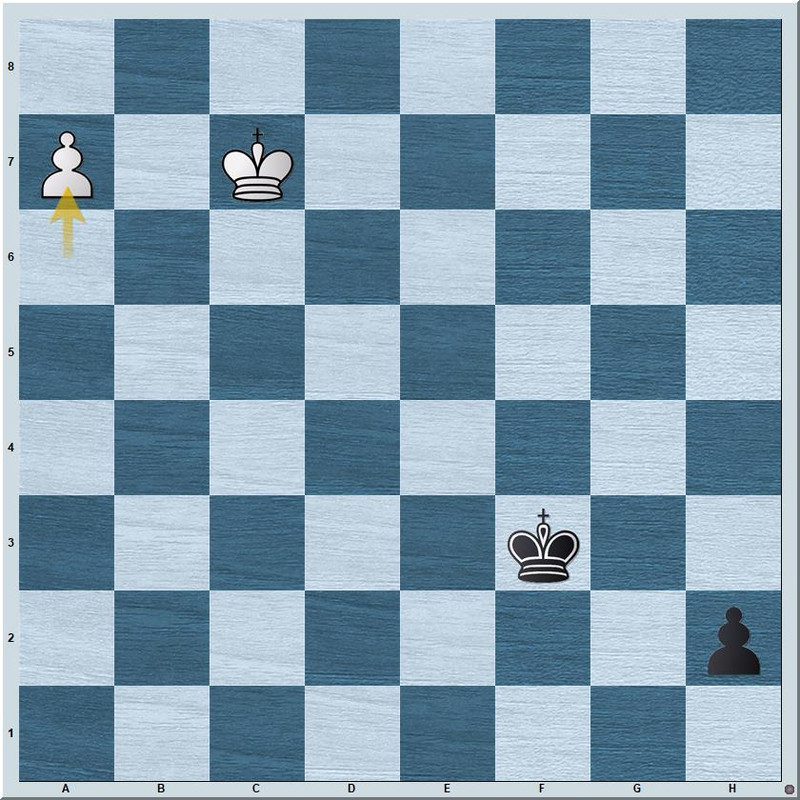 And after White promotes, a theoretical drawish Queen vs pawn endgame occurs. That sounds unbelievable!! How can a pawn hold against a powerful Queen?!

Chess is a rich game

In the course Must know theoretical endgames I’ve covered such Queen vs pawn endgames, including the position you’ve seen above.

Now, let’s go back to the position at the beginning of this article.

Back to the study

And while some crazy study situations might never occur where they are 8 Knights or 20 Bishops this one is very practical and many decisions in the endgames you get will depend on pawn endgame understanding.

If you are now thinking “how should I memorize all of this?”, I’ll share how before wrapping things up.

I will share with you a method of learning that helped me a lot in studying these kinds of endgames.
Practice! Just practice!

Find a sparring partner who is also interested in the same topic, and play many pawn endgame positions.

The positions below are my recommendations, although you can find your positions, experiment, flip the board, try to win or draw. 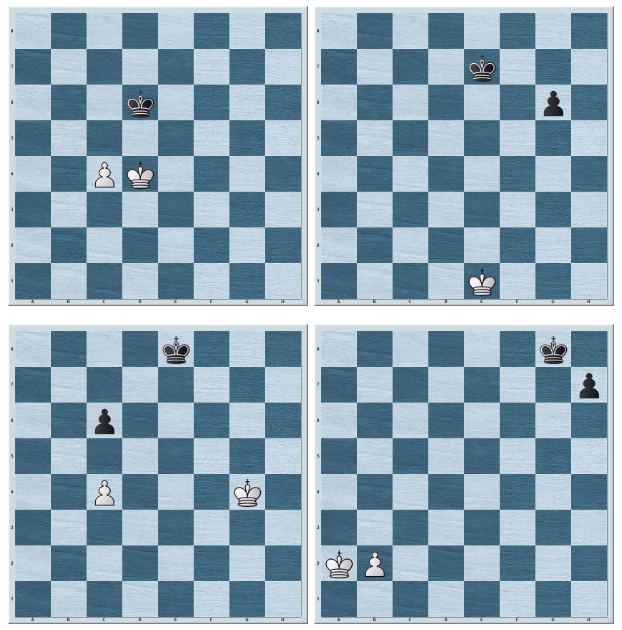 I recommend after the games, looking with the engine for mistakes.

While in the other parts of the game using the engine can be misleading and confusing, here there are only a few pieces on the board so it will only reveal the important mistakes.

And again the endgame topic is very large. Fitting it all in an article will take about 1 year of reading and 10-15 years of writing

The courses I mentioned previously(Endgame Roadmap and Must-know Theoretical Endgames) will give you the most important knowledge for below 2,000 level. Good luck studying them!

It’s now time to take your leave. We will meet again, either in a course, stream, another article, or maybe even a chess tournament!

Stay well and see you soon,

The article is originally on
https://chessmood.com/blog/theoretical-king-and-pawn-endgames 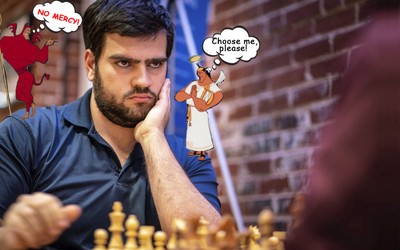 How to Show NO MERCY to Your Opponents

Being 'too kind' or lacking the ruthlessness to win could hold you back in a fight. Get tips on acti…Jan 24, 2023 Theoretical Rook Endgames - All you Need to Know U2000 Level

What are the most important Rook endgame concepts that players below 2000 rating should know? GM Gab…Jan 19, 2023 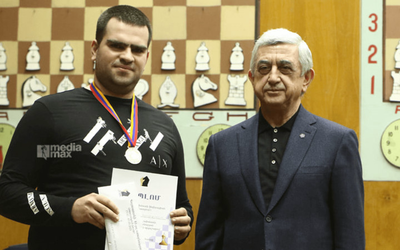 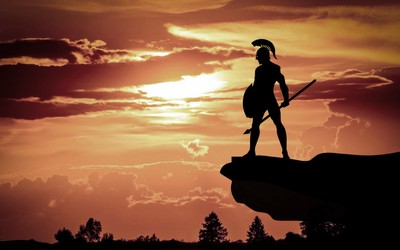 The Spirit of Warrior

Understand why fighting spirit is so important in chess and how do you develop it.Jan 4, 2023
Reconnecting